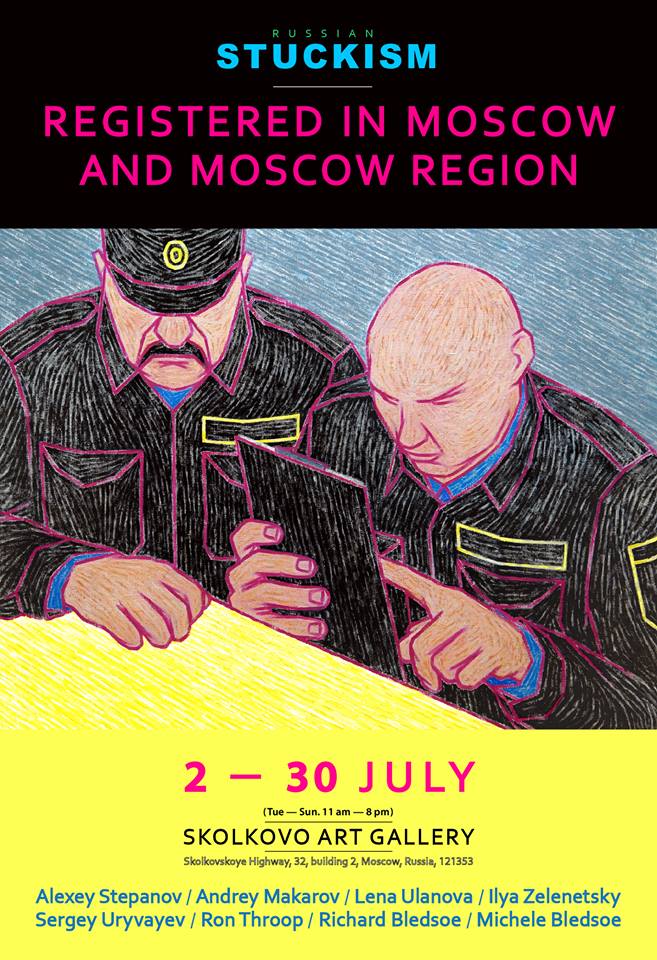 The exhibition in Moscow

“Communion has been one of my artistic goals for as long as I can remember.”

It’s been a very busy year.

I am thrilled to announce Michele Bledsoe and I were invited  as special guest artists for a July exhibition in Moscow, Russia. Also featured is New York painter Ron Throop, who has been very busy himself with an ongoing DIY cultural exchange with the Russian Stuckists who organized the show. He documents their exploits on his blog, Round Trip Stuckism.

I wrote about Ron Throop’s vision when they first launched the project. I really admired the initiative and enthusiasm shown. Grassroots painters separated by half a world and some really intense history were using art to come together, to learn from one another, and to provide support, despite vast physical distances, language barriers, and cultural differences. It’s really inspiring. Ron’s achievements were recently recognized when he was awarded a grant from the New York State Council for the Arts Decentralization Award Program.

The art they are making is fantastic.

Stuckism, the most visible manifestation of the Remodernist art movement, has spread to 236 groups in 52 countries. It truly is an art of the people. We have a mighty task to accomplish: to redeem art from the crisis of relevance that elitist malpractice has inflicted on the culture.

I was very grateful when Andrew Makarov sent me a Facebook message inviting us to share our paintings. Michele and I sent works to Russia for the show, and included a copy of our children’s book The Secret Kingdom as a gift. I’m looking forward to more exchanges with these creatives. We all speak the universal language of art.

“Russian Stuckism, registered in Moscow and Moscow region — an exhibition at a Moscow gallery “Skolkovo”, July 2nd – 30th. The exhibition is based on works of Moscow painters, who has joined the Stuckism International about a year ago: Alexey Stepanov, Andrey Makarov and Lena Ulanova. Their artistic way highlights the meanings of collectivism, equality between process and the result, and registering the events around them without judging the events. Alongside with the Moscow representatives of the Stuckism, you will see their colleagues from St. Petersburg (Ilya Zelenetsky and Sergey Uryvayev) and American artists Ron Throop, Richard and Michele Bledsoe. When exhibited together, the works of these artists suggest one of the answers to the question on the place of picturing in the modern art.”

7 thoughts on “EXHIBITIONS-Russian Stuckism: Registered in Moscow and Moscow Region”