Skip to content
HomeMEMORIALS: On the Veteran Portraits of George W. Bush

Last March, one morning on the way to work I was fortunate to hear on the radio an interview conducted by Hugh Hewitt. Although he’s often profundly off base on his analysis of events, Hewitt has interesting guests. On this program he was speaking with former President George W. Bush, about a subject I find endlessly fascinating: painting.

George W. Bush’s book of paintings “Portraits of Courage: A Commander in Chief’s Tribute to American Warriors” is a major best seller. It’s currently number one in many of the Art categories on Amazon, a reflection of people’s desire to support our veterans. However, it also reflects a positive response to a surprising development for our retired 43rd President –  his unsuspected creative talents.

Mr. Bush is characteristically humble about his work. He plainly states in the forward of his book he is an amateur: “I’m not sure how the art in this book will hold up to critical eyes. After all, I’m a novice. What I am sure of is that each painting was done with care and respect.”

I always say in real painting there is nowhere for the artist to hide; those reverent emotions towards the veterans the former President depicted are present in his paintings.

It’s an interesting story how Bush came to his art. “I had been an art-agnostic all my life,” he admits. However, as he was leaving office, he became intrigued by the dedication to painting shown by Winston Churchill. Inspired by Churchill’s essay “Painting as a Pastime,” Bush started working with a series of instructors to learn the craft. To his first teacher he stated: “‘Gail, there’s a Rembrandt trapped in this body…Your job is to liberate him.'” He was 66 years old.

The world was surprised in 2013 when hacker Guccifer revealed emails connected to the Bushes had been compromised. Unlike recent leaked Democrat emails, these messages were not full of dirty tricks, backstabbing, and fawning communications from reporters. However, the hacked accounts did expose George Bush paintings, including two sly self portraits in the shower and bath.

Out of the painting closet now, Bush started sharing his new passion openly. He disclosed he had painted pets and landscapes. At the advice of one of his teachers, Bush embarked on a series on world leaders he knew, including his own father:

The real focus of Bush’s post-presidency has been supporting wounded veterans.  Through the Bush Center Military Service Initiative, post 9-11 veterans and their families gain assistance transitioning back to civilian life. It was natural Bush’s two great interests came together. “Portraits in Courage” shows paintings of some of the veterans Bush has come to know. Proceeds from the books sales are going to support the Bush Center’s programs. 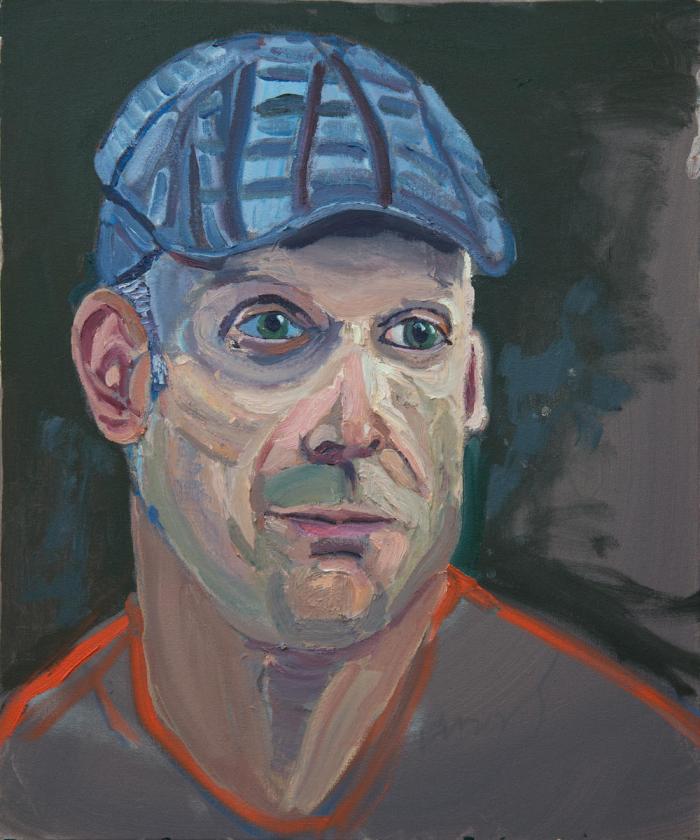 In addition to painting the veterans’ portraits from photographs, Bush tells their stories as well. He describes why they joined the military, how they served, how they were wounded in the line of duty. He then shares the triumphs and challenges each faced during recovery, and how he met them during his presidency and Bush Center events. These stories are not sugar coated; they acknowledge the true difficulties involved. But the overarching theme is inspirational, as the veterans speak of their determination and pride to be part of the United States Military.

There is much discussion about the gap between the experiences of the armed services and civilians. “But that civilian-military divide, I think Portraits of Courage may help bridge that by giving people glimpses into their lives, not just the painting,” Bush says; “… the stories are more important than the paintings.”

A notable example of these differences are attitudes about George W. Bush himself. While the civilian population,  agitated  by a relentlessly hostile media, turned very negative towards Bush during his presidency, he was always well regarded by the troops who served under him. As recently as 2014, 65%  of post 9-11 veterans stated Bush was a good commander in chief.

Time has been good to the reputation of Bush, perhaps because the current White House occupant is the subject of persistent histrionic Establishment meltdowns. Now partisan media types think it’s okay to make some positive comments about Bush, while still pouring on the typical gallons of bile and venom. Even cultural critic hacks have been cautiously laudatory. “The quality of the art is astonishingly high,” the New Yorker mentions in their column of recycled insults. “An evocative and surprisingly adept artist who has dramatically improved his technique,” The New York Times grudgingly admits during their litany of blame. Fake news CNN headlined their 2014 article that Bush’s paintings show “his softer side.”

Filtering out the ideology, I agree with the critics. As a painter, I recognize the work that went into his paintings, the ongoing series of judgments needed to reimagine the dimensions of life onto a flat canvas. Bush seems to have developed the instinct for applying paint so that it communicates. The works are full of personality, mood, and incorporate real moments of finesse. Other more awkward passages just enhance their expressive power. As noted by the co-founders of both the Stuckism and Remodernism art movements, amateurs willing to take chances, to reveal their own shortcomings, are the ones who push us forward:

The Stuckist is not a career artist but rather an amateur (amare, Latin, to love) who takes risks on the canvas rather than hiding behind ready-made objects (e.g. a dead sheep). The amateur, far from being second to the professional, is at the forefront of experimentation, unencumbered by the need to be seen as infallible. Leaps of human endeavour are made by the intrepid individual, because he/she does not have to protect their status. Unlike the professional, the Stuckist is not afraid to fail.

In that previously mentioned Hewitt interview, it was exciting to hear former President Bush speak in terms I could relate to as an intuitive artist. It’s worth reviewing some of the words he used that showed me here was a fellow artist, working to coordinate his hand, eye, mind and heart, to share his vision of life and his connections to humanity.

“A really good artist came to my studio with my instructor, and he said you know, I think you can paint. You ought to try to paint the world leaders with whom you served. And it was such an uplifting statement, because what he was saying was seek new heights. Try something different.”

“First of all, the painting has got a lot of paint on it. And, which I think conveys a sense of confidence in painting. The first ones I painted, the world leaders, it was real tight brush strokes. You know, I was trying to get it exact. And these are much looser. I think it’s a tribute to my instructors, and a tribute to time at easel.”

“…I don’t think the quest to develop a style that you can express yourself as fully as you want ever ends.”

“…painting is ahead of me for sure. It’s one of the great learning experiences, Hugh. It’s, you know, I think about it all the time. When I get back this weekend, I’ll paint. And I’m looking for a new project.” 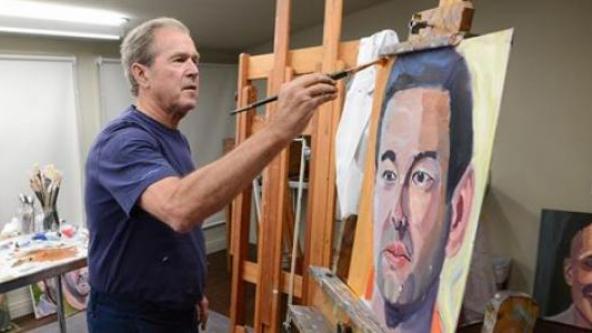 George W. Bush in the studio

UPDATE: Welcome Instapundit readers! Please visit other entries for more commentary on the state of the arts.

24 thoughts on “MEMORIALS: On the Veteran Portraits of George W. Bush”