Even though he is best known as a film director, David Lynch got his start as a painter. He still makes art, and as they saying goes: the way you do something, is the way you do everything. Lynch’s darkness and humor shine through in the various mediums he utilizes. From 2019:

The American filmmaker known for macabre, enigmatic films such as “Eraserhead,” “Blue Velvet” and “Mulholland Drive,” as well as his recently revived hit 1990s supernatural crime TV series “Twin Peaks,” seems to have a manic creative drive that has compelled him to explore every conceivable form of art: paintings, lithographs, black-and-white photographs, drawings, comics, collage, sculptures, stop-motion animation and even anthropomorphic design lamps.

“Yeah, I love to work,” Mr. Lynch said in a telephone interview from Los Angeles, where he lives and has his studio. “Every medium is so beautiful but each in their particular way, and you learn about them by getting in there and working with them and talking with them.”

Painters can make the most commonplace items fascinating. Case in point –  Claude Monet, who made haystacks beautiful. This article provides some background and context for Monet’s celebrated series.

The year 1890 was a very important moment in Claude Monet’s life; he turned 50 and bought property for the first time. It was of course his famous house with the garden in Giverny. Meules were inspired by the fields adjacent to his new home.

We are so grateful to our veterans, who risked all to keep us free.

Ed Bowen served as US Army combat artist in Vietnam. He has recounted his experiences in paintings, drawings, and a memoir.

Ed Bowen and His Art

Ed Bowen recalls teaching art classes at Villa Park High School in Orange in 1967 when rumors began circulating the U.S. would draft citizens to fight in Vietnam. At 26, and ripe for the picking, he wasn’t too concerned.

Since his parents had come to Corona del Mar from Canada when he was a child, he figured his foreign residency precluded him from having to register for the draft. Plus, he was working a plum job; he loved art and the kids loved him.

It wasn’t until he received a letter in the mail, informing him he was to report for duty with the U.S. Army on Nov. 28, that he realized how wrong he’d been.

“I had to say goodbye to the kids — my dream was shattered,” he recalled. “But, as I say now, the Lord had other plans, and he was to take me to the ‘ultimate assignment.’”

What happened next would begin an incredible journey that would take Bowen to some of the most perilous stages of the Vietnam War where, armed with only a sketchpad and pen, an Instamatic camera and a Colt .45 revolver, he would fulfill a mission to capture the conflict in pictures.

One of Ed Bowen’s Memories

Pat Douthwaite (1934-2002) was a Scottish dancer who turned her creative energy to painting. The article projects some Postmodern assumptions onto her work, but her images are amazing.

Douthwaite’s work has the rawness of someone who is self-taught, but it is clear when viewing it that not only did she possess a singular talent, but also a shrewd understanding of how the art would work for her. Her compositions have a driving, aggressive quality that can be relentlessly shocking while at the same time being utterly under her control. Originally a dancer, she was innately creative but with a huge physical aspect to her productive drive. She had studied mime, movement, and dance under Margaret Morris, who happened to be married to John Fergusson – one of the celebrated Scottish Colourists. Fergusson actively encouraged the young Douthwaite to paint, but not to attend art school for fear that it would spoil her originality.

In art it’s the image which ultimately matters. After a work is created, and the times and circumstances change, what an artwork is called might change too. Here are 6 notable masterpieces which actually have changed titles through time:

The painting widely known as Philosopher in Meditation has long been attributed to Rembrandt, and hangs in the Louvre with attribution to the great 17th-century Dutch painter. Until recently, the Rembrandt Research Project—started in part due to the numerous painters active in the 17th century that created imitations of Rembrandt works—disputed the attribution.

Now widely accepted to have been painted by Rembrandt, the piece has held alternate titles since it was created in 1632, including Scholar in an Interior with a Winding Stair. Though never officially renamed, many scholars have argued that Philosopher in Meditation does not do an adequate job of describing the pictured scene. The subject in the painting doesn’t appear to be a philosopher, and a woman seems to be walking up the staircase in fading light, indicating a domestic scene rather than a man alone in his study.

Nonetheless, Rembrandt’s work lives on under the title Philosopher in Meditation.

CREATION BY FOCUS GROUP: A 1994 Article on a Postmodern Art Event

In 1994 two Russian painters had surveys conducted of what people liked in art, and made paintings based on the results. The article notes some of the data collected:

Having initially planned to produce different ideal pictures for various demographic groups, in the manner of localised ad campaigns, Komar and Melamid wound up painting only two canvasses: America’s Most Wanted Painting (1994) and America’s Most Unwanted Painting (1994). This decision was dictated by the results of the survey, which surprisingly painted a picture of an aesthetically unified society whose tastes cut across social lines. Thus even though the preference for blue (the favourite of 44% overall) diminishes with increased income and education, it’s still the colour preferred by the majority in every group; ditto for paintings of outdoor scenes (88% overall), paintings with soft curves (66%) and those with fully clothed figures (68% to only 3% favouring nudes).

The image they generated is shown above. It’s pretty much a reflection of its times, a disjointed assemblage of a sort, despite the naturalistic style. It’s hard to see in  the reproduction but there’s a hippopotamus at about 10 o’clock behind George Washington, to fulfill the demographic preference for wild animals (preferred by 51% over domestic breeds).

According to their research this was America’s Least Wanted Painting: 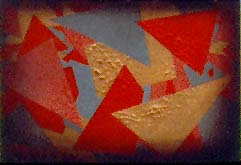 The subsequent promotion and analysis of the works oozed with postmodern irony and condescension. The Most Wanted Painting is presented as a work of incoherent kitsch. How gauche to create art that the general population might respond to!

It was an implied demonstration of how the establishment art world sneers at the backwards people who still expect art to contain beauty, skill, reverence, inspiration and a connection to life.

The exhibit was set up like a satire of a marketing department presentation, with supporting graphs and charts listing their statistics. But the deadpan adoption of the corporate style suggests a very different conclusion than what the artists may have intended.

I don’t read this as a wicked skewering of bourgeois taste. I see it demonstrating the catastrophic failure of the establishment.

Polling and phony populism allows them to craft a distraction from their agenda of looting and domination. The elitists try to pay lip service the whims of those the elitist systems have failed to inform and educate. The results are grotesque.

There is a lack of leadership among our would-be ruling class. That’s because their big ideas are they should be on top, and exempt from the rules they would inflict on others.

Their safe strategy is to keep all who would challenge these presumptions either ignorant, or co-opted into conforming with the elitist mindset. Joining in the derision against anyone who doesn’t accept muddleheaded postmodern nihilism is great way to signal one’s support of our masters.

The establishment uses contemporary art as a weapon to enforce inequality.

The Remodernism Manifesto of Billy Childish and Charles Thomson summarizes a solution to this distortion:

It is quite clear to anyone of an uncluttered mental disposition that what is now put forward, quite seriously, as art by the ruling elite, is proof that a seemingly rational development of a body of ideas has gone seriously awry. The principles on which Modernism was based are sound, but the conclusions that have now been reached from it are preposterous.

We address this lack of meaning, so that a coherent art can be achieved and this imbalance redressed.